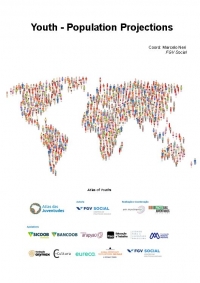 In a project entitled Atlas of Youths, spatial representation plays a prominent role. We emphasize here changes and levels of the of Brazilian youth population vis a vis global and local perspectives, their causes (fertility, life expectancy etc) and consequences (growth, social security balance etc).
After maintaining for almost two decades just over 50 million young people aged 15 to 29 years old, unprecedented levels in the country's history, Brazil will see its population in this age group return below this level from 2021 onwards. The Brazilian youth contingent may reach the end of the century reduced to almost half its current magnitude, reducing the possibilities of the nation's prosperity. Brazil does not go down this path alone. By 2060, the percentage of young people will decline in 95% of the 201 countries with population projections. Currently, Japan has the lowest percentage of young people in the world (14.7%), closely followed by Italy (15%), Spain (15.3%), Greece (15.9%) and Portugal (15.9% %).
Among the Brazilian states, the percentage of young people varies. The highest percentage of all is observed in Amapá (29.1%), followed by other states in the Northern regions. At the opposite extreme, the lowest percentages of young people are in Rio de Janeiro (22.1%), Rio Grande do Sul (22.1%) and São Paulo (22.2%), followed by other states in the South and Southeast. The youngest city is Pracinha in São Paulo with 48.2%, well above the Maldives’ 32.67% (1st in 197 countries). An older city is Mato Queimado in Rio Grande do Sul with 11.99% of young people, much less than Japan. Of the 20 municipalities with the least young people, 18 are from Rio Grande do Sul.

See the study at  https://cps.fgv.br/en/research/youth-population-projections 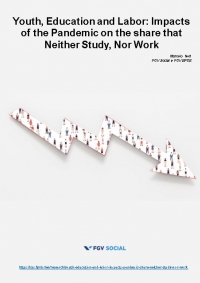 Youth, Education and Labor: Impacts of the Pandemic on the share that Neither Study, Nor Work

What was the Impact of the Pandemic on the Work and Study of Youngsters?

Recent studies conducted by FGV Social show high vulnerability of the youngest Brazilians during times of crisis. These shocks can leave permanent stamps, the so-called scar effect, on the trajectory for an entire generation even after the crisis. In normal times youth is a time of ascension in the labor market. Based on this evidence, we have decided to take a special look into the impact of the pandemic on young people taking place both in their work and study.

Initially, we described, through the use of PNADC microdata, the evolution of the binomial education and work amongst young people (between 15 and 29 years of age), in particular, those who are out of occupation in the labor market and in educational institutions. These statistics, of the so-called “neither-nor (nem-nem)”, offer a useful alternative to describe the greatest challenges faced in this transitional phase from childhood to adulthood. The bad news is that with the arrival of 2019.4 (last quarter of 2019) the share of young people that neither study nor work which was at 23.66% accelerated, reaching a historical record of 29.33% in the second quarter 2020, before dropping to 25.52% by the last quarter of 2020.

The study points out in a timely manner, which is fundamental in the case of public policy reactions, especially during the pandemic, pronounced labor occupational losses for young people in the past year, greatly expanding on the magnitude seen in the last 6 years. Solely in the pandemic the rate of unemployment or inactivity in the 15 to 29 age group rose from 49.37% to 56.34% between 2019.4 and 2020.4. This is the dominant factor used in measures of young people’s use of time.

On the other hand, we measured a surprising decrease in the dropout rate during the pandemic, which is present in all youth groups, reaching its lowest measured level in 2020.4, with 57.95% percent of the 15 to 29 age group out of school, compared to 62.2% in 2019.4. The lack of job opportunities coupled with lowered substantive academic expectations due to no restrictions on attendance and automatic approval may explain the lower dropout rate. In any case, it is necessary to take advantage of the opportunity and, for example, promote digital inclusion and new remote educational content.

The study presents a series of maps that detail these changes between Brazillian states who bear several responsibilities in relation to problems that affect young people starting with public highschool and unemployment programs plus security and traffic policies among others.

Finally, it is necessary to look at the inverted image seen in the mirror of the “nem-nem”, also focusing on those who work and study both at their jobs and at home. It is also essential to incorporate gray tones in political proposals and their diagnosis. The extensions of both working and school hours determine performance on both of these fronts. Concerning actions, it is necessary to seek the conciliation between study and work by graduating parameters in order to meet the final policy objectives, namely de facto learning and job creation. Incentives for reduced youth labor seems desirable from both perspectives, enabling better quality of learning as well as socializing work positions in a larger group of people, with effects also seen on labor equity

See the study at https://cps.fgv.br/en/NeitherStudy-NorWork 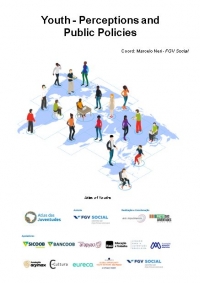 We explore research on young people's aspirations and assessments on a global scale, which allows us to differentiate the vision of young Brazilians. As well as capture the new paths taken in the pandemic. The general self-assessment of happiness among Brazilian youth, captured by the average life satisfaction at present on a scale of 0 to 10, was 7.2 in 2013-14 and decreased to 6.7 in 2017-18. This downward trend continues during the pandemic, going from 6.7 in 2019 to 6.4 in 2020. A drop of 0.8 points like the one that occurred with overall happiness in Brazil, ranked as the 3rd highest drop in 132 countries. A score of 6.4 is the lowest in the Brazilian series of life satisfaction. In addition to the general assessment of life, we cover the daily emotions of youth. Positive (joy) and negative (worry and anger) indicators worsened significantly in both the great recession and in 2020 in the pandemic. Negative indicators also worsened in 2019, a difference to be highlighted.

We focus here on the state of variables that occupy a prominent place on the agenda of young people, such as education and the environment. 41% of young people between 15 and 29 years old are satisfied with the education system in 2020, the lowest level in the series. There was a 375% greater drop in Brazil than in a set of 40 other countries interviewed during the pandemic that worked as a control group. The proportion of young Brazilians satisfied with the efforts undertaken to preserve the environment dropped from 33.1% in 2015-18 to 27% in 2019 and then 19% in 2020.

See the study at https://cps.fgv.br/en/Perceptions 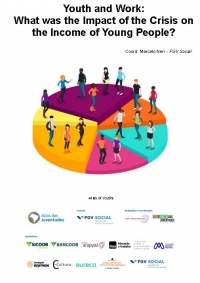 Youth and Work: What was the Impact of the Crisis on the Income of Young people?

PNADC microdata reveals that young people were the biggest losers of labor income from 2014 to 2019. Other groups traditionally excluded such as illiterates, blacks and residents of the North and Northeast regions had income reductions at least twice as high as the general average. This loss was 5 and 7 times greater among young people aged 20 to 24 years and among young adolescents, respectively. There is an increase in the inequality of income from work in the group of young people that is 41.2% greater than the increase observed for the population as a whole, indicating the need to understand the dynamics of the different youth segments. Let's see: between the fourth quarter of 2014 and the second quarter of 2019, the loss of accumulated average income of -14.66% of all young people combined. This fall is higher for particular some groups of young people: 15 and 19 years old (-26.54% ), 20 and 24 years old (-17.76%), northeastern (-23.58%) and illiterate (-51.1%).

In general, among young people, the income of the poorest half fell -24.24% against -14.66% of the general youth mean. The factors behind the drop in income and an increase in inequality among young people are the same, namely an increase in unemployment, a reduction in working hours, a drop in wages per hour/year of study. While years of schooling and labor participation, which are the variables most under the control of young people, attenuate the effects of this exclusionary recession.

In the midst of this youth tragedy there are some positive new directions. As of the first quarter of 2017, the average losses and income inequality of these young people is interrupted. The federal government announced the launch of a reduction in labor charges by around 30% for the first job for young people aged 18 to 29 years. There are, albeit modest, improvements in the youth's school attendance. Still, the overall picture is bad. The proportion of those who neither study nor work rises from 23.4% in 2014 to 26.2% in 2019.

The aim of this study is to characterize the labor and educational evolution of young people aged 15 to 29 in the period of rise. We provide an interactive database that allows for exploring the diversity of trajectories observed in this segment and their determining factors.

See the study at https://cps.fgv.br/en/research/youth-and-work-what-was-impact-crisis-income-young-people