Is it better to strengthen the BPC (i.e. cash transfers linked to the minimum wage) or expand the Bolsa Família (e.g. by creating the Renda Brasil)?

FGV Social assess the rejection of the Renda Brasil program vis-à-vis cash transfers attached to the minimum wage. According to our estimates, it would be better to expand the Bolsa Família program (PBF, also known as Family Grant) if the goal is to reduce poverty in a fiscally sustainable manner. Each extra Brazilian real (R$) spent on the Family Grant has a 673% higher impact on poverty than a similar increase of the BPC (Continuous Welfare Grant), the best-targeted cash transfer among all Federal Government’s policies that are linked to the minimum wage (e.g. public pensions, the Wage Bonus (Abono Salarial) and the Family Wage (Salário Família)). Consequently, the PBF is the most fiscally efficient solution to alleviate poverty, a fact that cannot be forgotten in Brazil after the Covid-19 pandemic, after the end of the Emergency Grant (Auxílio Emergencial). The time has come to abandon the wrong hypothesis, deeply rooted in Brazilian society, that the minimum wage is the best tool to reduce poverty. We have evidence showing that cash transfers linked to the minimum wage – which is the lighthouse of Brazilian social policies - are less efficient and effective than the PBF. Among the possible financing solutions for expanding the Family Grant are both the administrative and tax reforms.

The Bolsa Família is cheaper, reaches the most vulnerable individuals and impacts more the economy

The first argument in favor of the PBF is targeting: even when compared to the BPC, which is the best-targeted cash transfer linked to the minimum wage, we notice that PBF has 8 times more capacity to reach the poorest individuals. In quantitative terms, the BPC is similar to random allocation. We developed an indicator that shows how targeted on the poor Brazilian cash transfers actually are. The closer to -1 is the indicator, the best targeted on the poor is the policy. In 2019, the Concentration Index of the Bolsa Família was -0.6485, while for the BPC it was -0.0753, and for other social programs 0.0938, public pensions 0.5498 and for income sources combines 0.5428.

But what explains these differences?

2. BPC’s benefit (R$ 1045) is five times larger than PBF’s (R$ 191) and it can be accumulated by different people within the household, not including the benefit level in the BPC’s income eligibility threshold.

3. The story of the elderly individuals as heads of the household is true, but not significative in terms of inequality reduction because senior people live in smaller households. Moreover, the "altruist-effect” is modest: for each time the BPC’s benefit is enlarged, the health of the beneficiaries increases four times more than the health of other people within the household.

6. On the other side, one could argue that the cost of living for an elderly or disabled individual is higher, mainly because of health expenses, and that is a good reason why the benefit offered by the BPC should be larger. However, it is worth noting that social spending involves opportunity-costs, that is, spending in one program means not spending in another, and this is especially important in times of fiscal fragility of the state.

The comparison between the BPC and the PBF is relevant by considering their costs and benefits within a social spending portfolio, in which we compare the best-targeted programs on the poor, either linked or not to the minimum wage. This comparison becomes even more important after acknowledging that both programs (BPC and PBF) are focused on reducing poverty and that Brazil will go through a tight fiscal adjustment period after the Covid-19 pandemic when all the emergency spending will be gone.

The following table shows that the Family Grant (PBF) is, indeed, the most fiscally efficient tool, once, for each real spent on the program, we notice a higher poverty reduction. We estimate the BPC cost per Brazilian as R$ 10.39, in comparison to a simulated scenario without this program. On the other hand, we estimate the PBF cost per Brazilian as R$ 6.92 when contrasted to a hypothetical scenario without this program. When considering the CPS Poverty Line, each additional real spent on the PBF reduces the poverty rate 8 times faster than if BPC had its eligibility criteria expanded to ½ minimum wage per capita, as the Brazilian Congress has been trying to do. 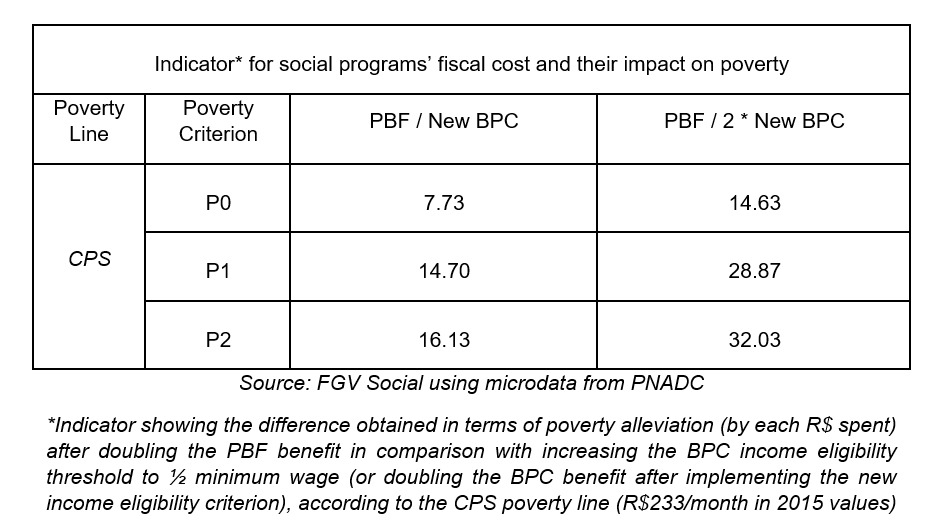 It is worth mentioning that we are going through moments of immense uncertainties concerning the future of the BPC in 2021 because there is a judicial dispute between the Brazilian Congress and the Federal Government regarding the income eligibility criterion of the program. Recently, President Bolsonaro has vetoed different attempts by the Congress to expand the coverage of the program to also include people up to ½ minimum wage per capita (today it covers individuals living in families below ¼ minimum wage per capita) from January 2021 onwards. This dispute is now on the hands of the Supreme Court [2]. Our goal here is only to show that the future expansion of social spending in Brazil should focus on enlarging the PBF and not policies linked to the minimum wage.

In case we also doubled the BPC, in addition to increasing its income eligibility threshold, the poverty gain would be approximately 15 times larger for the PBF. When looking at the poverty hiatus and the quadratic poverty hiatus, the estimates are even more favorable to the PBF, and this comes as no surprise since we have shown that the PBF has a significantly higher capacity of reaching the poorest individuals in society when compared to the BPC. Consequently, our estimates reveal that, in spite of revoking the creation of the Renda Brasil – which would expand the PBF by using resources from other social policies, the Federal Government should still focus on enlarging the PBF and increasing its benefit level, given that the program’s target public will be even more vulnerable after the end of the Emergency Grant offered during the Covid-19 pandemic, exposed to a depressed labor market and a scenario of huge uncertainties with regard to the future of the Brazilian economy. In conclusion, the PBF is cheaper, reaches the poorest individuals and changes their lives through education and health conditionalities linked to the program’s benefit, also significantly impacting the economy, facts that do not imply a need of cutting from the BPC to fund the expansion of the PBF. There are several different possible sources of revenue that could be used to increase the PBF benefit level and enlarge its coverage. We have elected the administrative reform, by adjusting public employees wages, and the tax reform, by increasing the tax rate on personal income and making the system more progressive, as the two most promising solutions to finance larger social spending in Brazil.

>> Access the Executive-Summary of the research "Comparing Cash Transfers Linked to the Minimum Wage vs the Bolsa Família Program (Renda Brasil)" at http://www.fgv.br/cps/BPC&BF_EN