Between 2014 and 2018, the income of the poorest 5% in Brazil fell by 39%. Consequently, the number of people under the extreme poverty line increased by 71.8% in this period – adding 3.4 million people in this group. This rise in extreme poverty occurred due to a harsh economic recession and cuts in the Bolsa Família Program (BFP or Family Grant). In the latter's case, first because of a reduction in the value of the benefit in real terms since it was not corrected according to the inflation in 2015 (a year in which inflation reached 10%) and somewhat in 2017 (when inflation was already under control). Second, because of a cutback in the number of beneficiaries. In net terms, around 1.1 million families were removed from the BFP between May 2019 and January 2020, thus creating an annual line of 500,000 families who should be covered by the program but are still waiting for a chance to receive its benefits. Other estimates suggest that at least one million families were waiting to enter in the BFP in 2019.

Therefore, the main Brazilian policy tool to fight poverty diminished during the economic crisis initiated at the end of 2014, which led to a loss of well-being and to an increase in the number of Brazilians facing extreme social vulnerability.

The Bolsa Família Program is a conditional cash transfer to alleviate poverty that covers today one-fifth of the Brazilian population (around 40 million people). Targeted on the poorest families and children who live below the lines of poverty and extreme poverty stipulated by the government, the benefit is withdrawn by the mothers and/or women in the family (90% of the cases) using a magnetic card. The eligibility threshold for the basic benefit, today fixed at R$89 per person, is similar to the lowest poverty line appointed by the Millennium Goals (US$ 1.25 per day adjusted by parity purchasing power), which was used as inspiration for the implementation of an official poverty line and the Bolsa Família's benefit criteria in 2011. The program’s cost is only 0.4% of the GDP, a tiny value if compared to the BFP’s impacts on the life of the poorest Brazilians and on the Brazilian economy as a whole. For example, for each R$1 spent on the program, R$1.78 is generated in the Brazilian economy. This implies that each real spent on the BFP impacts three times more the GDP than social security benefits and 50% more than the BPC - another Brazilian cash transfer policy focused on the poor.

In order to estimate the impacts of the BFP, such as assessing how it directly affects poverty or even the size of the program, first you have to solve a complex puzzle. In the last 5 years, there were changes on household surveys (mainly due to the substitution of PNAD by PNADC), in addition to changes on how the government make available the official data related to the program - given the transformation of the Ministry of Social Development into the Ministry of Citizenship. The household surveys are of fundamental importance to assess many dimensions of the program, to connect them and to compare the results with the data obtained through administrative registries of the program.

According to our estimates using PNADC microdata – which discloses information about the BFP since 2016, the program is the best targeted on the poor among all official public cash transfers in the country. The BFP’s Concentration Index* was eight times better targeted on the poor than the BPC, another official cash transfer focused on disabled people and poor elderly. Moreover, the Concentration Index grew 3.76% between 2016 and 2018 for the Bolsa Família. On the one hand, this could be an outcome of the fraud screening process implemented in the program. On the other hand, the number of beneficiaries fell by 2.51% and the program’s share in total income fell by 10.37% in the same period, representing a diminishing in the size of the program, either due to a reduction in the number of people covered by the BFP or due to a shrink in the mean benefit in real terms. Among those who receive the benefit, its mean value diminished 4.4% between 2016 and 2018. When considering the total population, the benefit reduction reached 6.75% in the same period.

When using the traditional PNAD, our estimates reveal that between 2014 and 2015, a period in which the economic recession walked hand-in-hand with accelerating inflation, the income from the BFP fell, in average, 13.61% for the total population, and 12.44% for the poorest 5% Brazilians. This reduction in the income from the Family Grant for the most vulnerable Brazilians contributed to almost half of their loss in per capita household income – a fall of 14.22%. 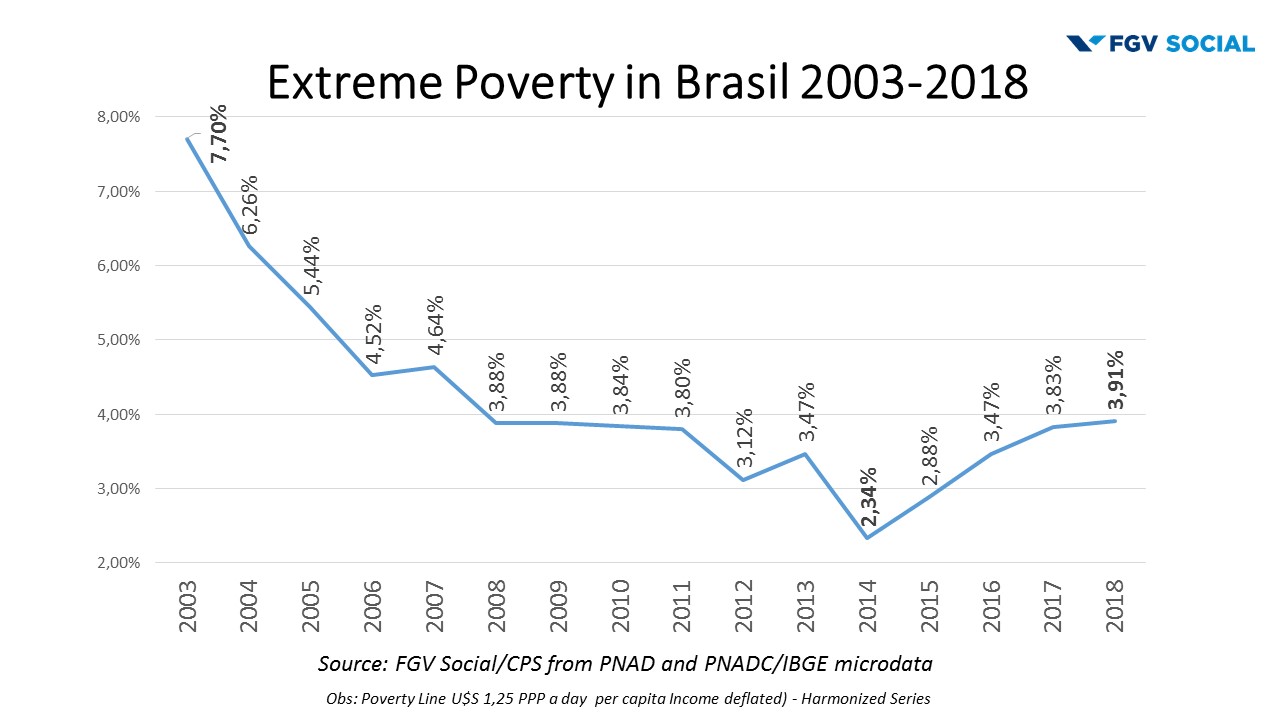 The Size of the Bolsa Família Program - Created in 2003, the BFP presented an impressive growth in the number of families covered by the program in its first three years of implementation, going from 3.6 million families after the law that regulated the program was signed in January 2004 up to approximately 11 million families in January 2007. On the other hand, the real mean benefit offered to the families only started to grow after the creation of an additional benefit for adolescents (called the Benefício Variável Jovem) in July 2007 in addition to adjustments in the benefits’ level. Then, in the following years, the growth observed in the program’s coverage was accompanied by an increase in the real mean value of its benefit. However, each variable followed a different pace. While the number of families covered by the program reached a plateau in 2012, the real mean benefit value offered by the program grew until 2014, a year marked by general elections.

Finally, it is possible to estimate the BFP’s benefits offered per Brazilian using data from the program’s payroll registries.  We estimated that after marked real per capita gains between 2011 and 2014 (20.82%), the real value of its benefit per Brazilian decreased by 21.53% between December 2014 and January 2020. The annual variation of the purchasing power was -14.19% in 2015, 0.76% in 2016; -1.87% in 2017; 2.53% in 2018. The assessment for 2019 is different because the government offered an extra benefit for the program’s beneficiaries only in December 2019**. Following a hypothesis that this extra benefit was equally divided between each of the twelve months of the year, the losses in 2019 would have reached -1.64%. Taking into account that the benefit was exclusively offered in December, the variation reached -9.2% for all other months of the year and an extraordinary gain of 81.6% concentrated in December 2019, which was lost in the New Year’s Eve. This sequence of losses in odd years, which correspond to post-electoral periods, suggest that the program kept being used in accordance with the electoral calendar.

According to Marcelo Neri, Director of the FGV Social, in a lecture at the Brazilian Congress, the imbalances in the Bolsa Família Program in the last 5 years resulted in a fiscal adjustment package over the shoulders of the poorest Brazilians that almost did not contribute to solving the fiscal fragility of the country. As an outcome of the cuts in the BFP, the most vulnerable people were exposed during a period of a harsh economic recession. Furthermore, these cuts made the economy’s recovery process even more sluggish because less income in the hands of the poor implies less consumption in the country as a whole, once the poorest consume a larger proportion of their family budget. Consequently, the ‘wheels’ of the economy kept turning around in a slow pace given the cuts in the Bolsa Família Program. Therefore, the evidence reveal a necessity of protecting the program from inflation and making it less susceptible to the electoral cycle. In addition to easing up the process of entering and exiting the program. Any future reform in the program should aim to make its beneficiaries less vulnerable to exogenous shocks, from either the economy or the political system. 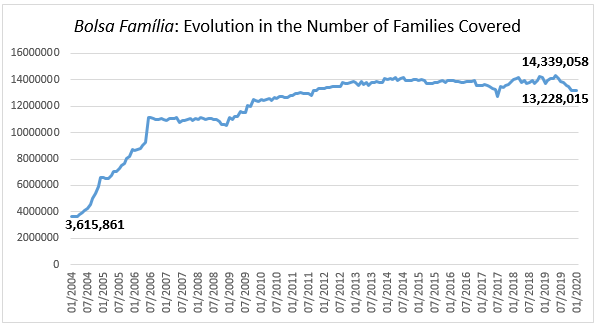 ** The government is not planning to offer this same benefit in the years to come. Nevertheless, it is worth noting that the concentration of this extra benefit in a single month negatively affects poverty. We believe that a better solution would be to dilute this benefit throughout the year, offering an equal increase to every month of the year, simulating a simple adjustment in the benefit's value. Following this hypothesis of an evenly distributed extra benefit, the losses related to poverty would possibly be smaller since the extra benefit would affect the family's budget in a more balanced manner throughout the year. Thus, it would not be exclusively focused on one month (especially December, a month filled with extraordinary expenses, such as temporary jobs related to Christmas, the bonus wage for formal employees in Brazil and extra social security benefits). This hypothesis of an extra benefit for Christmas and not a single penny for the rest of the year would negatively affect poverty. In addition, the extra benefit in December does not have an impact on the eligibility criterion of the program, thus reducing its impacts on poverty vis-à-vis an increase in the basic benefit of the program - which affects both the benefit level and the number of beneficiaries by increasing the extreme poverty line. 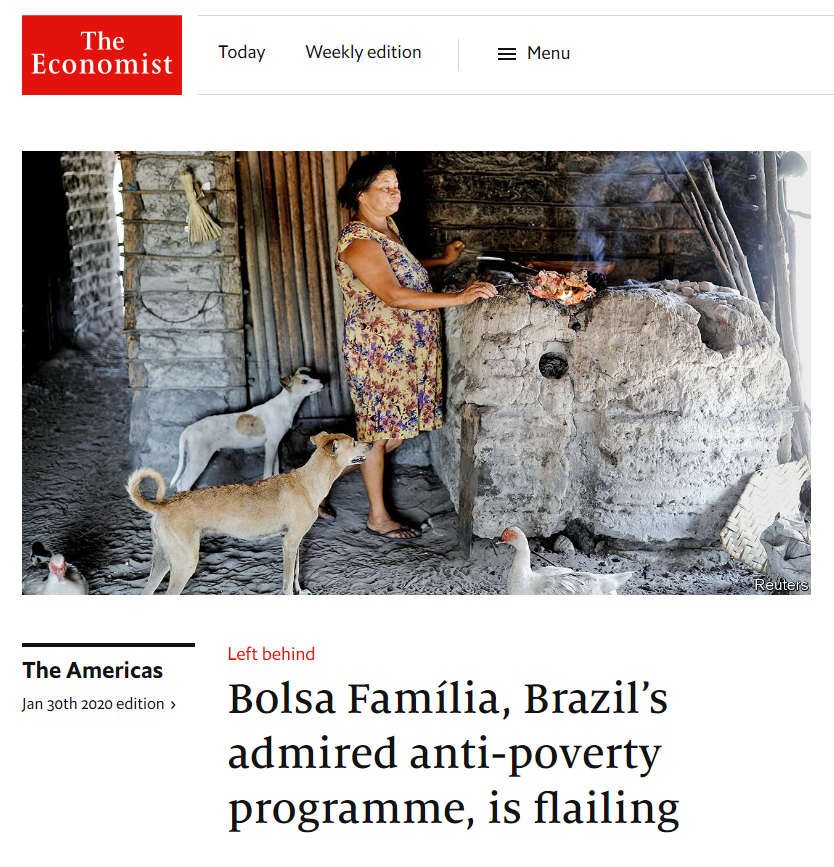 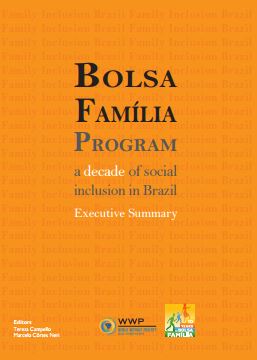 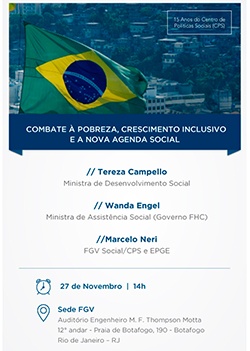 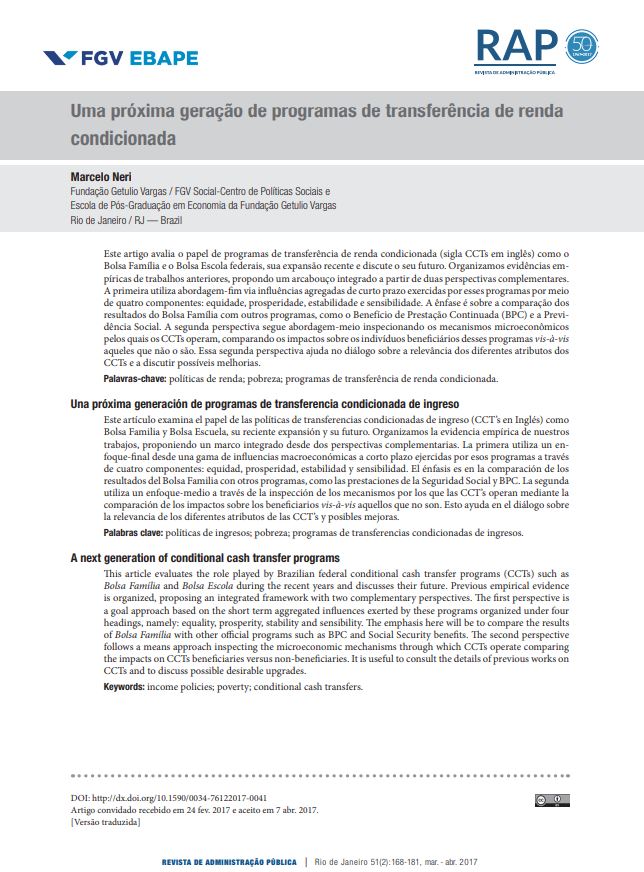 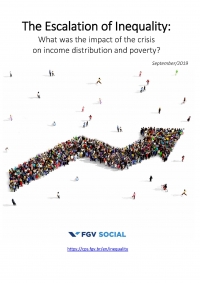 Article - RAP / "A next generation of conditional cash transfer programs"
-

Research "The Escalation of Inequality – What was the impact of the crisis on income distribution and poverty?"
-

Interview - Folha de S. Paulo - Global inequality: "Without the required focus, Brazil may take 15 years to return to the poverty levels of 2014"